It’s no secret that Granfors Bruks and Hults Bruk axes are giants in the axe world. They are the golden standard of Swedish axes and indeed among the best axes in the world that are manufactured on a large scale. But how are they different and is one better than the other? Hopefully this little guide will clear it all up for you. Read on to find out more about Gransfors Bruks vs Hults Bruk axes!

The History of the Forges

Gransfors Bruks. Hults Bruk. Husqvarna. Wetterlings. Hultafors. You probably know or have heard of some of these names. What do they have in common? They’re all Swedish. But the short of it is that Gransfors Bruks and Hultafors are the two main companies.

Gransfors Bruks makes its own axes – Wetterlings, a name you might have come across, stopped producing axes under its own brand in 2017 or 2018, its mill was folded into Gransfors Bruks operations, and it makes GB axes now.

That’s the short of it.

The more in-depth story is that these are two tool-makers whose metal-working tradition dates back, more or less unbroken, to 1697 (in the case of Hults Bruk). Hults Bruk started in the shipbuilding business, making metal objects such as nails, iron bars, and more. Hand tools quickly appeared in the production line.

It was the latter half of the 19th century, though, that saw the explosion of production of axes. That’s because of the great Swedish forestry boom in that century, with logging operations started in the north of the country. Demand for tools – and above all, axes – skyrocketed. At the peak of the forestry boom, 400,000 people were working either full or part-time in the vast northern forests. Most of them needed an axe.

Gransfors Bruks, Hults Bruk – “bruk” is the Swedish word for “mill” – and about 8 more mills in Sweden were churning out axes at the end of the 19th century, and getting very good at it.

In recent years Hults Bruk and Gransfors Bruks have come out on top, with the Hultafors group the bought Hults Bruk in 1992 also owning the Husqvarna axe-making branch. Whereas Gransfors Bruks make their own line of axes, supported by the mill and workers that made the now-defunct line of Wetterlings axes.

That means that Swedish axe manufacturing is covered by these two big rivals.

The good news is – they both make axes of the highest quality and level of craftsmanship.

The differences are in the level of finish and quality-control, and the price differences that go along with that.

Axes from both Gransfors Bruks and Hults Bruk are ready to use straight out of the box with no finishing up or sharpening necessary. They’re just that good.

Husqvarna axes (made by Hults Bruk) are lower priced so the polish isn’t that fine and you might want to sharpen them to be able to use them to full effect.

But Hults Bruk and Gransfors Bruks axes are sharp enough to draw blood if handled carelessly and are ready to use straight out of the box. The difference, I would say, is that Hults Bruk axes come with handles that are quite large. Now, for people with big hands, this is a good thing. For those that would prefer smaller handles, you might need to sand and shape it down a bit before you’re happy. In general, though, neither of them will need any sharpening or re-handling out of the box.

Price Differences Between Gransfors Bruks and Hults Bruk Axes – What’s Up with That?

As a rule, GB axes are more expensive than their Hults Bruk counterparts. I’d say this is down mostly to their respective time and experience in the North American market and marketing. Gransfors Bruks got to the states first, and one thing that they really had going for them was that Ray Mears, a well-known and respected outdoorsman and bushcrafter, vouched for the quality of their axes. This really gave them a boost over other competitors. Gransfors Bruks axes will usually be $20 to $50 more expensive than a similar offering from Hults Bruk. Some people swear that the Gransfors Bruks quality control and polish is more reliable, others consider them to be on par. I’m in the latter group, so I would most likely choose a Hults Bruk over a similar Gransfors and use the money saved to buy something nice like a good sharpening stone or some other accessory.

Now let’s compare the different types of axes that each brand offers – hatchets small and large, backpacking and bushcrafting axes, felling axes, and splitting axes and mauls. They’re ordered from smallest to largest, so if you’re interested in larger axes, scroll down.

Compact hatchets are among the smallest axes you can get. They’re designed for carving, limbing, splitting small pieces of firewood for kindling, and you can also use them to prepare food such as chopping up meat and vegetables since they’re light and easy to handle. The drawback, of course, is that you can’t really do much else with them. Still, Gransfors Bruks and Hults Bruk both offer their version of compact hatchets. They are the Gransfors Bruks Hand Hatchet and the Hults Bruk Jonaker. The Gransfors hand hatchet has a slightly longer edge (3.25 inches vs 3) and heavier axehead (1.3 lbs or 600 grams vs the Jonaker’s 1 lbs or 500 grams). 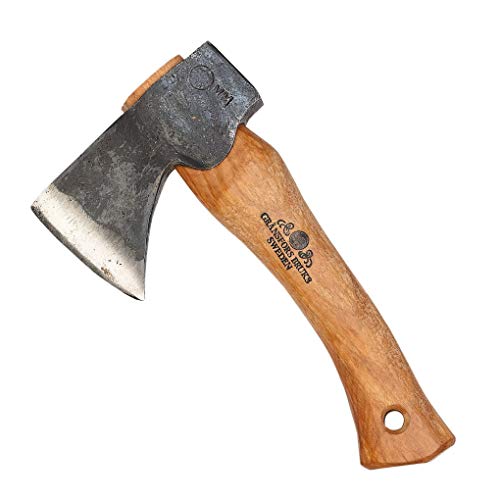 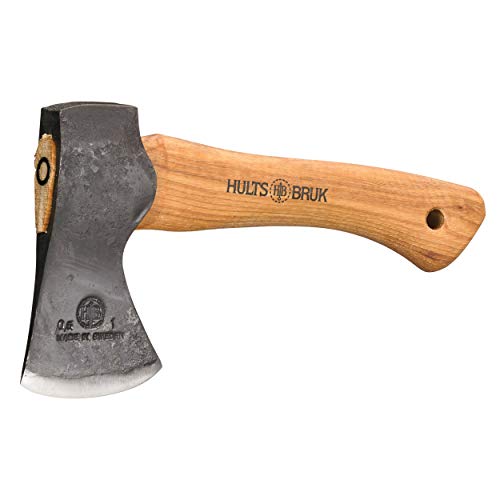 Both Gransfors Bruks and Hults Bruk offer larger hatchets, though Gransfors has Hults Bruk beat on variety here, with three models of hatchets between 13.5 and 18.5 inches in length versus Hults Bruk’s two. The Gransfors Bruks Outdoor Axe (14.5 inches) is a great, but often overlooked small, general-use hatchet. The axehead weighs just 1 lb, but it has a steel collar just beneath that allows you to split wood with more confidence, as it protects the handle from overstrikes.

The Hults Bruk Almike and Hultan Trekking axes are both longer than the Gransfors Outdoor axe, with the Almike (16 inches) being 1.5 inches longer but weighing just as much, while the Hults Bruk Trekking axe is 14.8 inches long. Neither of them have steel collars.

Finally, there is the Gransfors Hunter’s axe, which is the only true hunter’s axe in the lineup as it has a soft, rounded poll to help with dressing game. It is 18.5 inches long and the axehead weighs 1.5 lbs or 700 grams. You can already start splitting larger pieces of wood with this and chopping down small trees with greater ease. Its length makes it possible to use either single-handed or with both hands, making it a versatile little axe. 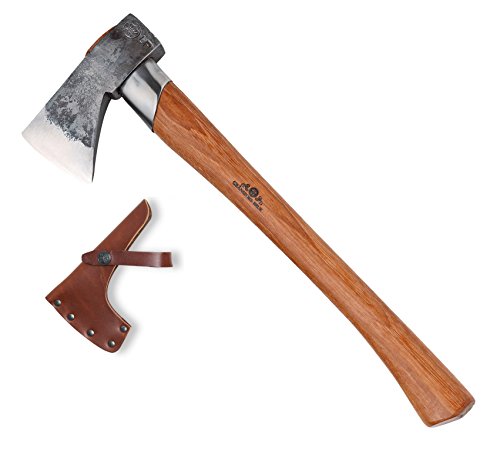 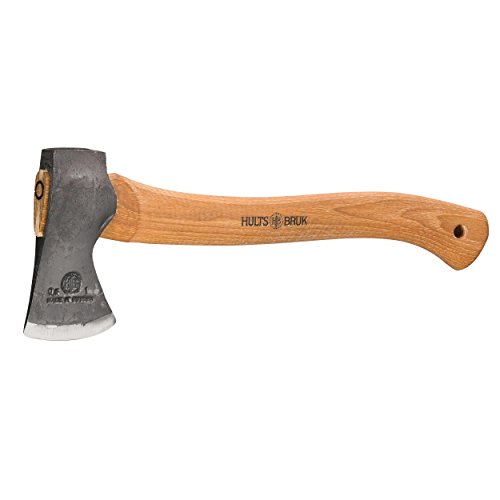 Oftentimes you need something with a little more heft than a hatchet. You might want to chop down a number of small trees to make a shelter, remove large tree limbs, or split a decent amount of firewood. Doing all of that with a hatchet designed to be used with one hand is a no-go. Hults Bruk and Gransfors offer a number of excellent models just for this kind of backcountry life, whether you’re living it long-term or on an extended ramble through the woods.

Gransfors Bruks make their Small Forest axe for this category, and it’s a real piece of work, perfectly-balanced and easy to swing again and again, for extended periods of time. It is 19.25 inches in length and the axehead weighs 1.5 lbs (700 grams). It has a 3.25 inch cutting edge.

In general, I recommend the Gransfors Small Forest axe is an excellent all-round tool, but if you feel like you need something with more felling and striking power then I recommend the Hults Bruk Akka for its extra length, or the Salen if you want a heftier axehead that’ll be that bit more effective at splitting wood. Compare their specs below to help you make a choice!

Gransfors Bruks produce their aptly-named Scandinavian Forest axe. It has a length of 25 inches, with a 3.5 inch cutting edge and an axehead that weighs 2 lbs (900 grams) to take big chunks out of the softwoods found growing across Scandinavia.

Hults Bruk makes three models in this range – the Kisa, Kalix, and Torneo. The Kalix is the largest and heaviest of the three, with a length of 28 inches, cutting edge of 3.75” and an axehead weight of 2.25 lbs.

American-style felling axes have longer handles and much heavier axeheads than their Scandinavian siblings. That’s because American hardwoods such as hickory and oak need a lot more force for foresters to be able to fell them at a decent pace. Both Gransfors Bruks and Hults Bruk offer their take on the classic American felling axe, with Hults Bruk offering up two models.

The Hults Bruk Atran has the shortest cutting edge of all three (4.35 inches), but is otherwise identical to the Hults Bruk American Felling axe in terms of length and axehead weight.

Finally, a category in themselves – splitting axes and mauls are used for the task of splitting logs and rounds of wood, to be used for either firewood or other purposes. They don’t do much else well (especially mauls), because the profiles of these axes are much wider and their edges – blunter than regular and felling axes. They force the fibers of the wood apart through sheer blunt force, instead of cutting through them as an axe with a thinner profile would. This also helps with keeping the axe from getting stuck, which is something that you don’t want happening with every third swing when you’re splitting a big pile of firewood for the winter.

Gransfors Bruks offers two models of splitting axe – a larger and smaller splitting axe. They’re almost identical, but one has a 31-inch handle, whereas the other – just 20 inches. They both have a 3.5 lbs axehead. Still, the smaller one will probably be the better choice if you already have firewood cut up into small to medium-sized rounds of wood. They both have a steel collar guard to protect the handle against overstrikes. Gransfors also makes a bona fide splitting maul, which weighs in at a whopping 5.5 lbs for the axehead, with a straight 31.5-inch handle and an overall weight of 7 lbs. Get this only if you’re going to be splitting thick, serious logs of hardwoods and you’re sure that you’ll be able to handle it (for most people the splitting axe will work just as well while being easier to use).

Hults Bruk also offer two models of splitting axe – the Gran and the Bjork. The Gran is the smaller of the two, with a 20-inch handle and an axehead weight of 2 lbs, while the Bjork clocks in at 30 inches and 3.5 lbs axehead weight. The main advantage of these two over the Gransfors models is that they’re pretty much just as good at splitting wood, but cost roughly half the price of the Gransfors models. Ok, they don’t have steel collars to protect against overstrikes, but that’s the only substantial difference.

I recommend the Hults Bruk models if you’re looking to spend less, but still get an excellent axe for the price. Gransfors Bruks axe are just as good and maybe even better, but come at a higher price point. I hope you found this guide useful and informative. Good luck making a choosing – whichever brand you do decide to go with, you’ll be making a good choice!