The Hults Bruk Kalix felling axe is a compact felling axe, and in this review I’ll be taking an in-depth look at it. It has a mean bite and will make short work of small and medium-sized trees. And, thanks to its compact size, it’s easy enough to carry around and works well for cutting off tree limbs and splitting firewood, too.

It is hand-made in the well-known and highly-regarded Hults Bruk forge in Sweden. Weighing just 2.25 pounds, the Kalix is just under the length of a baseball bat at 28 inches of handle length.

As far as felling axes go that’s not very large, but it is just about the standard size for a “boy’s axe” – which is not meant for children, despite its name, and which is usually the most useful axe size for most people’s needs. 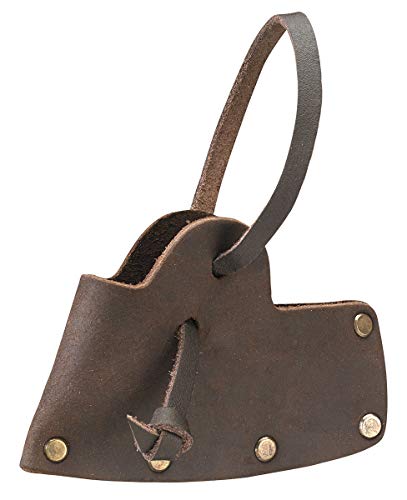 The axehead of the Hults Bruk Kalix is forged Swedish steel made – forged – by hand and machine in the Hults Bruk factory in Sweden. A smith who specializes in making axes day after day touches every single axehead. And since Hults Bruk have over 300 years of experience making tools, you can be sure that the axehead is better than any mass-produced Mexican or Chinese axe could ever be.

The axehead has a slim profile for maximum penetration of wood, for cutting through the fibers that hold trees together. The bit of the axe is about 3-⅞ inches long (with curvature), so it’s got a decently-sized cutting edge that allows you to take those bites out of trees quickly. Because the Kalix, like the rest of Hults Bruk axeheads, is made out of medium-carbon steel.

Since the steel is so high-quality and it is struck many dozens of times, it makes the axehead hard and durable, keeping an edge well for a long time, but it also means that it’s not as hard to sharpen as very hard, high-carbon steel bladed tools.

The steel mix is proprietary information, but most people agree that it is similar to 1055 American steel, with 0.55% carbon.

The axehead on the Kalix will serve you well, for sure, as long as you take even the most basic care of it. It does, after all, come from an expert forge with hundreds of years of uninterrupted axe-making experience.

The handle is American hickory, as is standard among good-quality axes, and is advertised as being 28 inches long. In fact the usable length is a bit less due to the shaping of the heel and the “shoulder” that flares out and tapers back in just before the handle meets the axehead. What is nice about the Kisa handle is that, as with other Hults Bruk products, they don’t put any sort of lacquer on it. The only treatment is polishing with linseed oil, which you can then sand off and treat any way you like.

The handle length and weight of the axehead means that the axe is easy to use and it’s hard to lose control of a swing. That, combined with the thin profile of the axehead, means that you can go through small and medium-sized trees with ease. Big chips fly off when you chop trees with the Kalix. A 10-inch diameter softwood tree should take 10 swings or even less to get through.

The Kalix is fine craftsmanship and fulfills its purpose well. It makes work easier and faster than using a Lowe’s or Home Depot off-the-shelf axe. I will say one thing, though – the Kalix isn’t built for splitting logs or big rounds of green wood (especially hardwoods).

That’s because the thin profile of the blade can go deep and get stuck, requiring a lot of pulling and leveraging or even cutting with another tool to get it loose. Already cut or dried rounds of wood should be fine, though – it’s just the big logs that you need to watch out for.

Felling axes are built for felling, not splitting. Within its specialization, of course, the Kalix performs like a champion.

In Conclusion: The Hults Bruk Kalix

The Kalix is, as we can see, a fine tool that does its job well. It’s not a massive axe and so not the best choice for felling large hardwoods such as big oaks or maple trees, but will make short work of small and medium-sized trees.

The Swedish craftsmanship ensures an excellent build and blade quality. The balance is good – it feels almost light in your hands and easy to use, a sign of a well-hung and balanced axe. It costs more than any generic Home Depot axe, of course, but it will also last you longer, serve you better, and make your work much easier than those axes ever could.

You get what you pay for. Don’t use it for stuff that it’s not meant for, like splitting logs, and take care to keep it dry and away from moisture, and the Kalix will be an axe that you’ll be able to hand down to your children and even grandchildren. All in all, a great, solid tool. Thanks for reading!