Fiskars produce excellent modern versions of classic designs, and the Fiskars Brush Axe is one of them. The blade is 9 inches long and coated with an anti-rust, low-friction coating to help it slice through wood and be easier to pull out if it does get stuck. The handle is a composite material that the blade is fit-molded into, meaning that the blade will not separate from the handle unless the handle breaks, which Fiskars handles very rarely do. And at such a price point, you can easily just buy another one 10 years down the line. It comes with a sheath for safe carrying and handling when not in use. Overall, the Fiskars Brush Axe is a very solid tool made by a reputable Finnish company. Great value for the money.

Continuing with the Fiskars brand, this strange-looking Fiskars Machete Axe serves great as a brush axe because it stays faithful to the brush axe principle – having a curve at the end of the blade that allows for pull-cutting of suckers, vines, and brambles. The 18-inch blade (with an overall length of 29 inches including the handle) is also good if you want something with a bit more oomph than the 9-inch-blade Fiskars brush axe. The handle is made of a composite material and the blade is molded into it during manufacturing, making for a very durable tool. Also highly recommended for anyone looking to do clearing work on their property or on a trail. 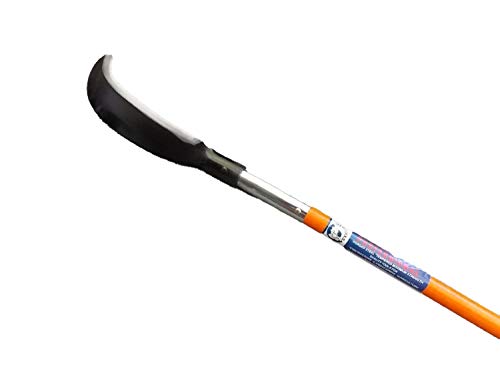 This is a ditch bank blade design on account of its large blade (11 inches) on a long fiberglass handle (44 inches). This brush axe ditch bank blade would be great for working on slopes and situations where you need greater reach, such as when you want to cut branches that are higher up above the ground or clear large amounts of woody brush or plants from a ditch. If can even be used to take down small trees, although it’s not its primary function. 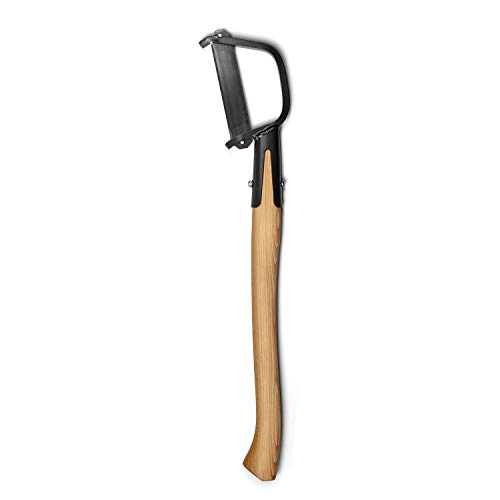 The Husqvarna clearing axe has a unique design – it’s what is known as a Swedish clearing axe design. It has a removable, replaceable blade that is held very tightly in place by what you could call a bracket. This bracket is made of spring steel, designed to be flexible so as to allow you to remove and insert the blade as well as to lessen the risk of the blade breaking from a bad strike. It is 26 inches in length, and you can wield it with one or two hands. With one hand you can swing it somewhat like a scythe, clearing low-growing brush, or use an overhand swing to reach branches higher up. This is especially useful for clearing portage trails if you’re carrying or wheeling a canoe at an angle. You can also use it two-handed much like you would an axe – it’s sturdy enough to take down small trees without problem. 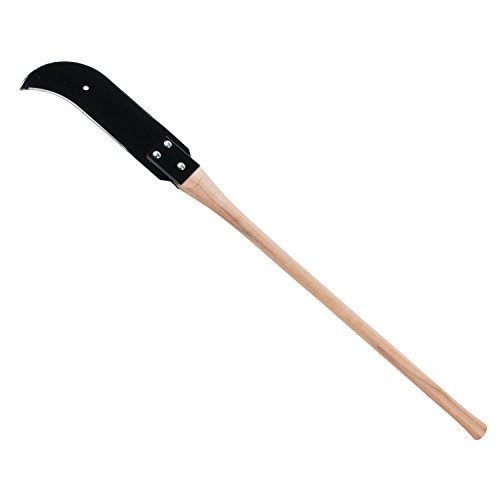 This Council Tool ditch bank blade is a real grandaddy of a tool – the blade is 16 inches long on a 40-inch handle. This made in the USA tool is meant for serious work and works great if you don’t want to bend over and need to clear a lot of brush. You can use it down low, near to the ground, or up high above your head. You can also reach the trunks of rough, tangled, prickly bushes or brambles that would otherwise be a big pain to reach. Made in the USA of high-quality US steel, and great value for the money. It comes in two sizes – the larger one and a smaller one that has a 12-inch blade on a 30-inch handle. Highly recommended. 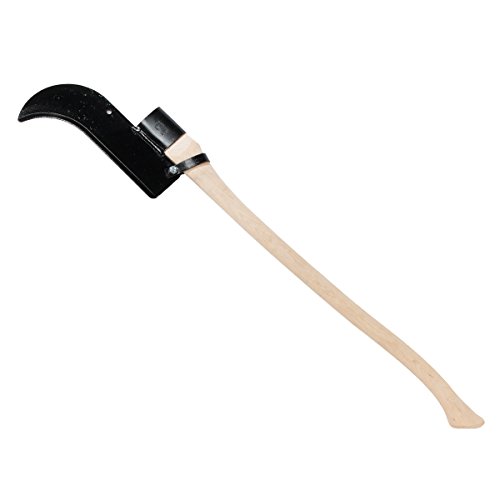 This is another offering by Council Tool – the Council Tool bush hook. It is slightly smaller than the CT ditch bank blade, coming in at a 12-inch blade on a 36-inch handle, but with a design better suited to proper chopping. With this tool, you can swing a powerful chop into a small tree, bush, or bramble, and then use a pulling motion to either complete the cut or pull it towards you. This is useful when fighting brambles, as you often may cut through one or two with a swing, but others cushion it or even get the tool stuck in them. A sharp edge on the hook part allows you to fight through such situations with much more ease than a regular axe. High quality-steel, made in America. Highly recommended as well. 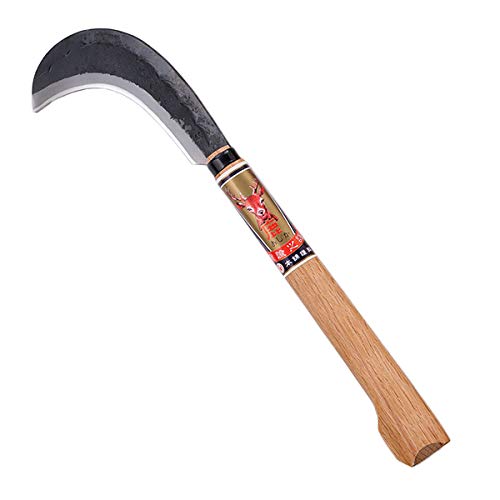 Japanese culture had great need of wood and brush-clearing tools in their mountainous and wooded lands. The Ojika 16.9-inch billhook, with a 6.3-inch blade, is an excellent tool with a strong curve that allows you to hook and pull-cut your target, but keep the mobility and dexterity that you lose with bigger tools. The blade is thick and double-edged Aogami Nr. 2 steel, ensuring that this is a durable, long-lasting tool. Made in Japan, this comes with a leather sheath to store the billhook in when not in use.

Are brush axes and billhooks better than machetes? In many situations – yes! As always, though, it depends on what kind of environment you’ll be cutting and clearing in. The major advantage of brush axes and billhooks over machetes is that the first have a hook at the end. This is great if you’ll be working in woody bush, with lots of brambles or shrubs or saplings. With the hook, you can pull these out either directly or to the side. The shape of machetes means that you can’t do the same with them – they’re straight, and are better suited for clearing thick but “green” undergrowth. There’s a reason why machetes are so popular in the jungles of Central and South America, while brush axes and billhooks were used in harsher climates (both hot and dry and cold and wet) dominated by plants that were evolved to be woody to survive winters or blazing hot and dry summers. In the jungle, everything is green year-round.

What is a brush axe used for?

A brush axe is used for clearing brush (as the name implies), small trees and saplings, and large green plants such as weeds along a trail or property.

What is a billhook used for?

Billhooks are essentially the same thing as a brush axe and are used for the same purpose. The word “billhook” has a longer history than the phrase “brush axe”, as billhooks are recorded dating back many hundreds of years in the UK, where the were widely used by farmers and peasants to maintain and shape hedgerows

What is a ditch bank blade used for?

Ditch bank blades are a larger version of brush axes/billhooks. They have the same basic pattern blade mounted to a long handle. That’s because they were used to clear ditches and roadside embankments from weeds, tree saplings, and bushes or shrubs. The long handle allowed the user to do so effectively without having to get onto the slope or into the ditch.

There are many variations of billhook designs, most coming from the United Kingdom and England, where these tools were widely used and from which they came to America. Here is a list of these various designs:

Unlike other billhooks, Knighton pattern billhooks didn’t actually have a proper hook at the end. They were more like cleavers and were used for chopping

The Devon billhook had a beveled edge on one side of the blade and a blunt hook tip. Another important design feature of the Devon billhook was an incision or notch at the base of the blade. This has two explanations – one is that it was used for a strap so that users could “mount” the billhook to their wrist, while a second theory is that the notch was honed and sharp and could be used to strip trees such as willows and others of their bark.

Yorkshire pattern billhooks had beveled edges on both sides of the blade and these were also among the largest billhooks used in the UK, with a large handle and a blade that was larger and heavier than normal billhooks. This allowed users to cut through thicker stems of bushes and branches, and was the preferred tool of choice for hedgelayers, as they could hack into the stems of hedge bushes (being careful not to cut through them completely) with one swing and then lay them down (hence hedge-laying).

Unlike other billhooks, Knighton pattern billhooks didn’t actually have a proper hook at the end. They were more like cleavers and were used for chopping

Spar billhooks are smaller versions of traditional brush axe/billhook designs. They usually have only one beveled cutting edge, and the blades tend to be only 5 to 7 inches long.

Sussex billhooks have a more pronounced curve to the tip. They were used for hedge maintenance, as the curved tip allowed users to catch branches and trunks in the thick hedge and cut them with a pulling motion.

How to use a Brush axe/Billhook videos:

Here is a short clip where different types of billhooks are described, as well as the process of laying hedgerows:

Here is an excellent short 1942 documentary from British Pathe about the art of “hedging” and a true hedgelayer at work, where billhooks play a major role: