Updated on December 20, 2022 by Michael Culligan

Viking axes – both faithful historical replicas and fun and practical, but less historically-accurate designs alike – are widely available online. The popularity of the hit show Vikings and the main character Ragnar Lothbrok – and his battle axe – boosted interest in Viking axes for many people. A Viking axe is a great gift for yourself, a friend, or a loved one who is an axe or Viking history enthusiast.

This is a guide to the best Viking style axes out there for the money, and I’ve tried to include different designs of axes so that you can choose what you’re interested in – practical, decorative, or both. Let’s get into it!

The Norse Tradesman Viking Battle Axe is just a bit shorter than the Shadow Cutlery Ragnar Lothbrok axe, coming in at 24 inches, and it has a curved handle, unlike the Shadow Cutlery Viking axe. However, it is more historically accurate to what the Viking axe design actually was, using what is known as a “skegg” axe head design. The top of the 6-inch edge doesn’t curve upwards nearly as much as the Ragnar Lothbrok replica Viking axe does, and instead, the beard of the axe is longer and truer to history.

The handle is made from rosewood, a very hard and sturdy wood, and it also has leather strips wrapped around the handle. It has Norse Elder Futhark runes carved into the handle for that extra Viking touch. Finally, the 1095 high carbon steel axehead (with a hardness of 56-58 HRC) has been heat-treated for excellent edge retention – a treatment that the Ragnar Lothbrok axe lacks, unfortunately, leading to an edge that goes dull faster than this one.

All in all, an excellent and faithful interpretation of a classic Norse or Viking axe design. Probably the best quality Viking axe on the mass market – have to be quick, though, as Norse Tradesman doesn’t really “mass produce” these and they may be out of stock. 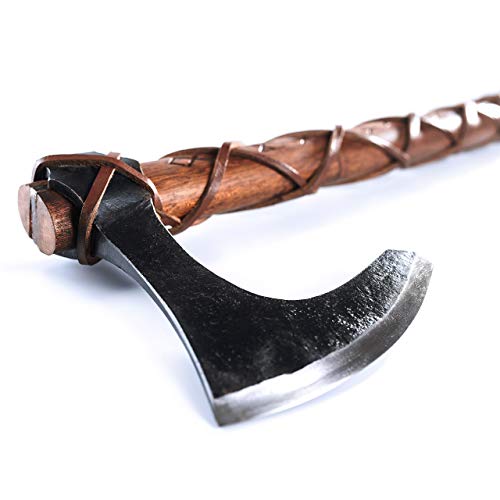 8.7/10Our Score
Check Price on Amazon

This is the official, authorized replica of Ragnar Lothbrok’s axe from the show Vikings. It comes in at 24.5 inches in length, with a straight, stained ash wood handle (historically accurate) and leather strips wrapped around the handle and head for better grip. It weighs 2.4 pounds and is fully functional – the high carbon steel axehead edge is not dull and will definitely cut through whatever is in its way. 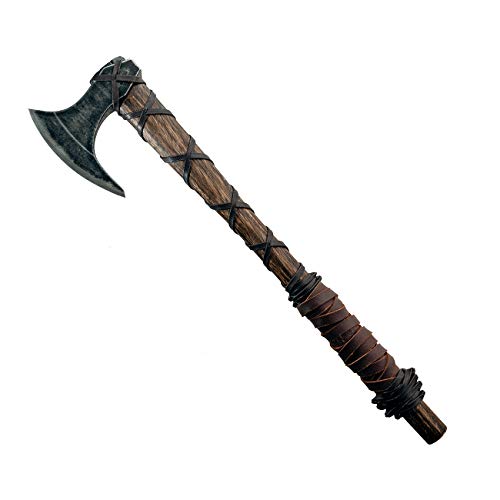 Moving on, we’ll look at three axes from one company – Cold Steel. The three are all Viking-inspired designs, and are a great choice if you want a budget Viking axe that you can customize and change as you see fit. In my opinion, they are among the best value-for-money battle ready Viking axes that you can get now. Here they are:

The Cold Steel Viking Battle axe is a much simpler (and less expensive!) beast than the first two axes listed here. It is longer, at 30 inches in length, with a large, 7-inch cutting edge with a “horn” at the top and bottom. The design is modeled on the historical Dane axe.

If you don’t like the handle, you can get a different replacement handle from Cold Steel as the eye shape is the same as most other Cold Steel axes, or you can make your own. Overall this is a great axe for the price, with a lot of potential for modification and customization to create the look and feel that you want. Now for the negatives. There are two main ones.

First, this axe isn’t premium quality. It shouldn’t be expected from axes in this price range, either, but that’s a simple fact. You’ll probably have to sharpen the edge, you might have to refit the axe head if it comes loose or rehandle it if the handle turns out to break easily.

The second negative is that it is mass-produced in Taiwan. Again, this isn’t a bad thing by itself, but it’s not US-made with US production standards. These drawbacks are offset by the fact that it is a helluva lot less expensive than other axes of a similar size and design. Just something to keep in mind! 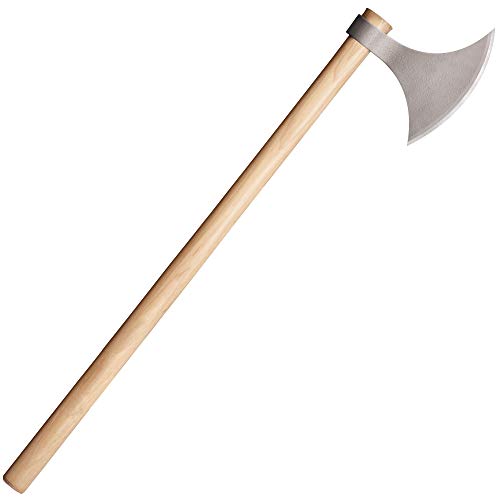 The Cold Steel Viking Bearded axe has the same length as, but a different design than the Viking battle axe. The cutting edge comes in at six inches, with a small horn on the top of the edge, and a prominent beard hooking downwards. It is a classic design and weighs just 1.1 pounds.

This is a great, battle-ready Viking axe that you can use as a camp axe, in historical reenactments, or for throwing competitions. A Cor-Ex sheath, sold separately, is also available to help keep the axehead away from humidity. The same positives and negatives as applied to the Cold Steel Viking Battle axe apply here as well. You can definitely customize it as you like, as the straight handle is very simple, but at the same time is a blank page of sorts (the same goes for the axehead itself).

I would say that this, along with the Battle Axe, is the best budget Viking axe out there. 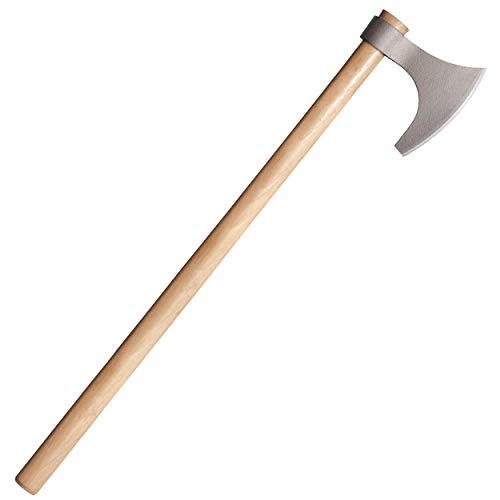 The third of the Cold Steel Viking axes is the Great Axe, and it has that name for a reason. It has a whopping 48-inch handle, with a 10-inch cutting blade. It weighs 4.6 pounds (2 kilograms) and is a beast of an axe. If you’re looking to go into battle with a large, serious Viking axe, this is a great choice. The thickness of the blade is 3 millimeters, and the 10-inch cutting edge ends in two large horns on either end.

The handle material is tough American hickory, to prevent breakage during use. This is not really a homeowner’s axe – it won’t be very good at chopping firewood or anything like that. But if you want to train with it or participate in historical re-enactments and medieval battles, it’ll be hard to find an axe that offers such good value as the Cold Steel Viking Great Axe does. 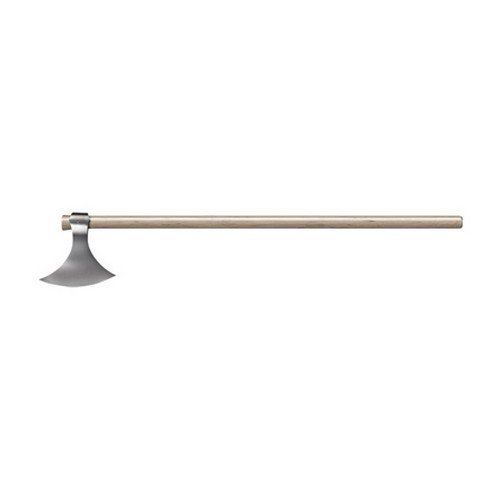 Viking throwing axes and tomahawks both have very similar profiles – it is simply the best, most effective shape for such tools and weapons. Hence the name mashup, but if you’re looking for a Viking axe that you can throw around and even use in competitions, the Thrower Supply Viking throwing axe is one you should consider. A 19-inch handle made of straight-grain American hickory will ensure durability and control, while the light weight – only 1.6 lbs – will allow you to carry and toss it far without getting tired for a long while. A 3.75 inch cutting edge, with a slightly longer bottom edge, gives it that authentic, traditional Norse throwing axe/tomahawk look.

The one thing to note is that the manufacturer uses a friction fit design to secure the axe head to the handle. That means no wedges. But if you want to add a wedge, you can – and reattaching the axehead is simple and straightforward. If you need a spare handle, Thrower Supply offer them, as well as sheaths, for a good price. 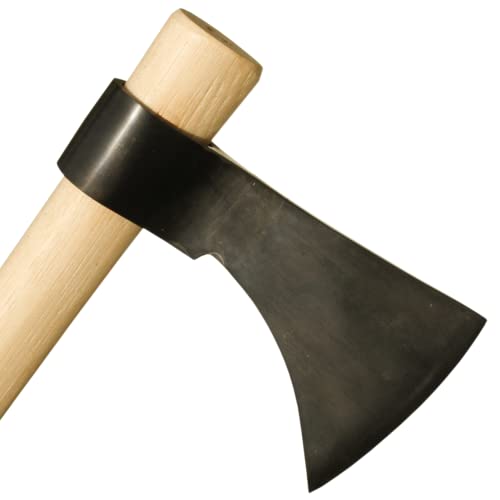 Condor Tool are known as affordable tool makers. Their offering in the Viking axe market is the Valhalla Viking Battle Axe. It comes in at an overall length of 30 inches, with a 6-inch cutting edge that has a prominent beard. The axehead is made of 1060 high carbon steel, with an  HRC value of 50-55.

The handle is made of burnt American ash, giving it a look different from the usual hickory handles and closer to the traditional wood choice (hickory didn’t grow in the Viking homelands, but ash did). They also add a light touch of Viking runes and patterns on the handle.

Finally, what is a nice bonus, is that it comes with a heavy-duty handcrafted leather sheath. Good value, I’d say! 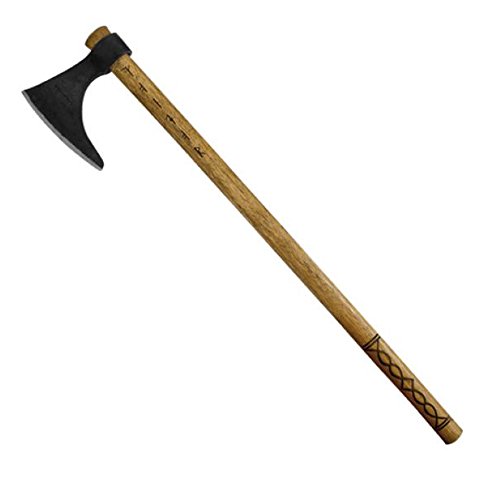 The last – but not least! – Viking axe in this list is a bit unusual. It is the Viking bearded axe/hatchet, made by a smith in Bulgaria, Ivan Tasev. It comes in on the smaller side, with a 14-inch handle, but the 4-inch cutting edge is larger than some other axes on this list. The steel is hardened to HRC 55 and the handle, which has a slight swell and curve at the poll end for better grip and control, is treated with a beeswax finish.

It weighs just 1.3 lbs or 580 grams. It’s a great choice if you want to support a small business and handmade craftsmanship, and has got a proper rustic look that is more authentic than many mass-produced axes. 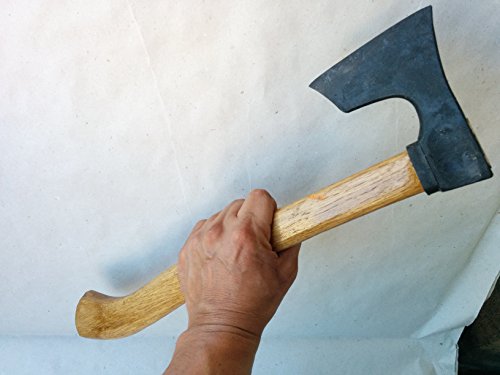 What was a Viking axe used for?

Viking axes, at least Viking long axes, were designed and meant for one thing: conflict. Warfare, plunder, raids – axes were a perfect tool to defeat opponents and subdue invaded populations with. Axes designed for conflict took on different forms. The beard allowed the wielder to hook an opponent and unbalance him, pull a weapon out of his hands, and so on. The horns on battle axes made for a longer cutting edge, which was good as Vikings were usually up against lightly-armored or unarmored opponents and didn’t need to have short cutting edges for the extra kinetic concentration those gave.

Viking hand axes could often be the same axe used at home on the farm for household work. Viking battle axe design grew out of simple axes used for chopping and splitting wood, processing meat and bones, and other tasks of everyday Viking life. Less well-off Viking warriors often took the same axe used at home on their raids and into battle. It was, after all, a very versatile tool.

How long was a Viking axe?

How much did a Viking axe weigh?

What were Viking axes called?

The traditional name is the Skeggøx (from Old Norse – Skegg, meaning “beard”, and øx, meaning “axe”), which gives a hint as to the preferred design.

I am a lumber worker who performed logging services for Oregan's forestry industry for over a decade. I have spent years honing my skills and experience to become a well-rounded axeman. I enjoy timbersports and have ranked in my local lumberjack competitions. I'm exited to share my knowledge of axes and lumber tools with everyone to help. I also have a large collection of restored vintage axes that I carefully maintain.