For camping, bushcrafting, or just everyday yard work trimming trees and bushes, a folding saw is a great tool to have. With a folding saw you can make clean cuts and not have to expend energy swinging an axe.A saw is often faster and more efficient for small tasks such as harvesting and processing thin trees or branches for a shelter. In this article I’ll be comparing two well-known folding saw brands – Bahco and Silky folding saws. More specifically, we’ll be looking at the Bahco Laplander vs several Silky folding saw models. Bahco produce just the one model, while Silky offer at least 3. Without further ado, let’s get into it and find out which is better – the Bahco Laplander or the Silky models?

First up, the Bahco Laplander. Made in Sweden, it has a 7 ½ inch blade with 7 teeth per inch. The blade is specially coated for protection against rust and low friction, so that it doesn’t get stuck in wood. It has a two-component plastic handle with a leather strap – no fabric or anything that can get and stay wet. It has a safety lock for both lock-in and lock-out positions.

The Bahco Laplander weighs just 6.38 ounces or 181 grams, which is the kind of weight you want if you’re carrying around a saw in your pack for large distances or over several days.

The main differences between the Bahco Laplander and Silky GomBoy folding saws are the blade and handle length and weight. The GomBoy has a longer blade at 8.3 inches and more teeth – 8.5 – per inch compared to the Laplander’s 7 teeth per inch. The Silky is 5 inches longer in total length than the Bahco Laplander. That makes it less attractive as a bushcraft saw that you would pack and take on a hike when space and weight are at a premium, but if that’s less important – you’re going camping with a car and don’t have to carry a lot of weight for larger distances – then the GomBoy is a fine choice. The GomBoy also has a clear plastic hinged case for storage. But the Bahco Laplander is only 70% the weight of the GomBoy, so if carry weight is important to you, it’s a better choice.

The most direct comparison between the Bahco Laplander should be made with the Silky PocketBoy. Both are designed and marketed as lightweight, portable folding saws perfect for bushcrafting, camping, hunting and other outdoor activities away from home. There’s barely a weight difference – 6.38 ounces or 181 grams for the Laplander, and 6.1 ounces or 173 grams for the PocketBoy. The Laplander is also longer in both blade and handle length – with a 7 ½ inch blade (190mm) vs the PocketBoy’s  5.1 inches (130mm) – so a 2.4 inch difference. You can also get a 6 ¾-inch blade for the Silky. The handle on the Laplander is 9 inches (230 mm), while the Silky PocketBoy folds down into 5 inches (130 mm). So the Bahco takes up more space in the pack. But the longer handle on the Laplander makes for a better feel in the hand – at least for me, I’m 6 foot 1 and small tools feel, well, small in my hands. That’s why the Bahco Laplander feels more comfortable in my grip. Also, the Silky PocketBoy’s handle also has a  contour in a way that it feels like there’s only one “right” way to hold it. The Bahco Laplander handle is also curved, but not contoured, so it feels less “specific” about how you can and should grip it. They both have plastic handles, but the Silky has a rubber overlay for extra grip. Not that big a difference, in my opinion. Advantage to the Bahco for comfort.

On to the cutting quality. Here the Silky PocketBoy beats the Bahco Laplander, which is a very good saw and cuts very well, but the Japanese tooth design of the Silky is a step above. You can go through wood with what feels like zero effort. That is to be expected, as the Silky has more teeth per inch, leading to a finer cut. So, advantage to Silky there (but I should repeat that the cutting standard is high for both, and definitely much better than a run-of-the-mill hardware store folding saw).

Finally – the price. There’s no question that the Bahco Laplander is cheaper, by about 25% when I last checked.

You can order replacement blades for both of these saws if the original breaks, and the price advantage is again for Bahco here, as the blades cost a few dollars less. You can also put blades from other Bahco folding saws on the Laplander, but I’m unsure if other folding saw blades will fit on the PocketBoy.

That’s it for the Bahco Laplander vs Silky folding saw comparisons. But what if you want a more traditional tool, with a wooden handle? In that case I recommend taking a look at the Opinel Folding Saw No. 12 and No. 18 models (the numbers refer to the blade length in centimeters). Opinel are well-known for many years as quality knife makers, and their folding saws are no different. And costing only a few dollars more than the Silky, it might be worth it if you’re looking for a high-quality folding saw with a wood handle. 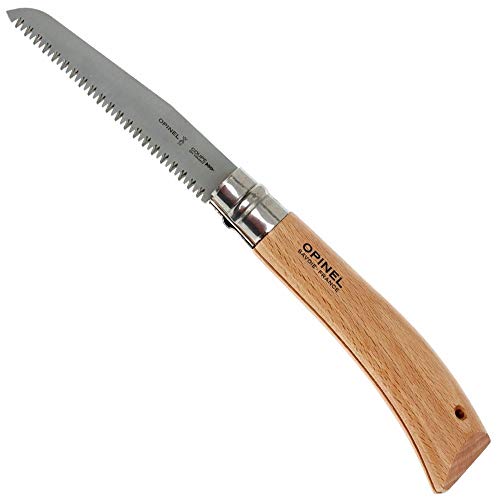